This video is about the two week wonder, as Bob Glidden called it. The Undefeated 1978 Pro Stock Fairmont. The video has myself asking Bob questions, and him answering them. The original interview was from Competition Plus, Legend series. This is my favorite Bob Glidden car. I documented some earlier racing with Bob Racing racing Dyno Don at the 77 World Finals, Segway into the 1978 Pro Stock season. This video documents the 1978 pro Stock Tour, and all the NHRA Pro Stock races that the Fairmont was undefeated in. The tour started with Bob racing his 78 Ford Pinto, at the start of the season. He raced the Pinto at the opener on February 12, 1978 at the Auto Club raceway, where he won. The next stop was Gainesville, March 12, 1978, where he lost to Frank Iaconio. Loaded and headed to State Capital Raceway, Where he took the win on April 30, 1978. Next stop on the tour, was National Trail Raceway, June 11, 1978, Bob lost to Richie Zul. The next race was the July 16, 1978, the Summer Nationals, at Englishtown Raceway, Where Bob debuted the Undefeated 1978 Ford Fairmont. At this race he took out the Bill Grumpy Jenkins Vega, driven by Larry Lombardo. The next 4 races were, Sanair Super Speedway,(8/6/78), Indianapolis Raceway Park, The Coveted US Nationals, (9/4/78), Pacific Raceways (9/24/78), and The World Finals, at Ontario Motor Speedway( 10/8/1978). Bob Glidden won every one of those 5 consecutive races. These wins brought him and the Undefeated Fairmont, the NHRA Pro Stock Championship for 1978. The car only ran 5 races. Bob Glidden you are a Pro Stock Champion…….. 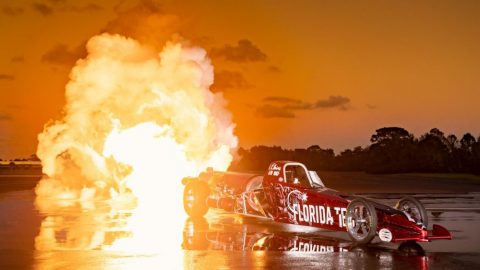