In what he says is his final season in the FuelTech NHRA Pro Mod Drag Racing Series presented by D-Wagon, multi-time world champ Rickie Smith said he already received his one wish for the year, which was picking up a victory to go out in style.

But the Pro Mod legend would certainly enjoy another victory in his swan song, especially if it comes close to home at zMAX Dragway as part of this weekend’s Betway NHRA Carolina Nationals. He’s also in the hunt for another championship, trailing Kris Thorne by just 69 points heading into the final three weeks of the season.

Smith insists he’s not worried about the title chase, but he is looking forward to putting on a show in front of family and friends this weekend in his nitrous-powered Sokal Chevrolet Camaro.

“Anytime you can race close to home, it’s great,” said Smith, who has advanced to five final rounds this season. “I’ve doing this for a living for the past 40 years and I feel like it’s a heck of an accomplishment. I’ve done what I’ve needed to do, and won a lot of races and championships, and that’s what makes me happy. There’s so many people who have supported me over the years from around here and I’m really thankful for that. It’s a big deal coming to this track and this race, and I just want to do the best I can.”

The race, which is the eighth of 10 events during the 2022 season in the FuelTech NHRA Pro Mod Drag Racing Series presented by D-Wagon, is powered by Pee Dee Fleet in Charlotte. The company, which was founded 15 years ago, delivers a one-stop truck and trailer center with 24/7 roadside services and complete trailer repairs. In addition to top-quality mechanics, Pee Dee Fleet has a hydraulics shop, paint booth and body shop. The company also sponsors Tylor Miller, who won earlier this season in Virginia, and Smith, who has enjoyed his relationship with the Miller family.

“Charlotte is our home track for NHRA, so it was a logical decision to utilize the sponsorship afforded to NHRA Pro Mod to campaign for Diesel Technicians to join our

family-based workforce at Pee Dee Fleet, and to support the class that we are passionate about,” said Russell Miller, owner and CEO of Pee Dee Fleet. “We’re looking

forward to experiencing NHRA Pro Mod as the ‘powered by sponsor.’”

Added Smith: “It’s a great family and great people. They’ve been awesome to work with and I enjoy the family atmosphere that they have around me.”

On the track, Smith remains a major threat in the talent-filled class, but he’ll face off with plenty of challengers in Charlotte, including Thorne, who has three wins this season, Indy winner Lyle Barnett, two-time world champ Stevie “Fast” Jackson, Topeka winner Justin Bond and Doug Winters.

Smith, though, is content with what he’s already accomplished this year, feeling no pressure as he races at his home track during the final stretch of the season – and possibly his incredible NHRA Pro Mod career.

“We’ve got a good car, there’s no doubt about that,” Smith said. “I was tickled to death to get that win. This is my last year and I just wanted to get a win before I left. That was my whole goal.” 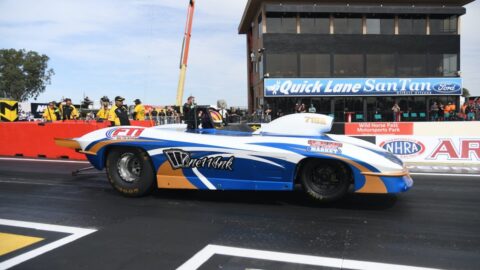